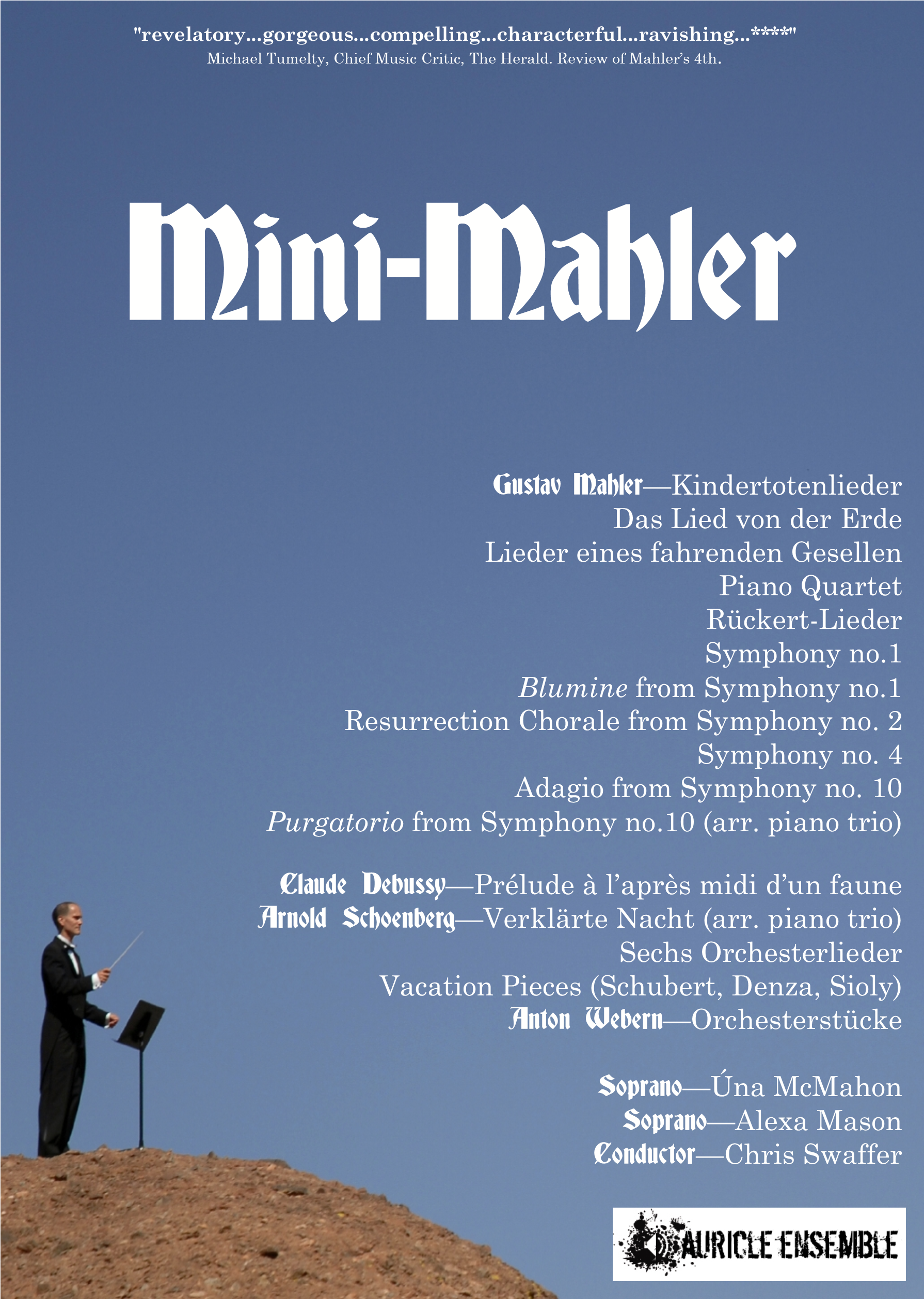 The starting point for Auricle’s Mini-Mahler project was the Society for Private Musical Performance (Verein fur Musikalische Privatauffuhrungen) established in post-war Vienna. Created in 1918, it was the brainchild of composer Arnold Schoenberg who was tired of the conservative and stifling criticism of new music by critics and audiences. He sought to create an environment where music could be carefully rehearsed and then performed in front of genuinely interested members. Clarity and comprehensibility were the aims of the society and Schoenberg would personally rehearse the gifted young musicians. Many large scale works, performances of which would be unthinkable in the financial climate of post-war Vienna, were meticulously prepared and arranged for reduced ensemble or piano duo with more complex works often repeated in the same program.

Though performances of Mahler’s largest works are by no means rare today, these ’Verein’ reductions of Mahler’s works have endured, indeed, there are many modern attempts at reducing his work for chamber ensemble. These arrangements seem to make more legible his compositional intent, by clarifying lines and reducing the music to its bare essence. In that sense, they are still important in making the music of Mahler more accessible through entirely new performance contexts.

The ensemble is formed around a basic group of string quintet, piano and harmonium with the addition of various wind soloists. Since 2010, Auricle has performed most of the available Mahler reductions and the available works. Works with voice are performed in German with live surtitling at no extra charge.

Songs of Mahler's wandering wayfarer feature alongside Maxwell Davies beautiful and introspective trip around the island of Hoy.

Alexa Mason
Cumbrian soprano Alexa trained at the Royal Scottish Academy of Music and Drama, before taking part in English National Opera's OperaWorks programme. Subsequent cover roles at ENO include First Squire/Flowermaiden 'Parsifal', Susanna 'The Marriage of Figaro' and Iris Marinus in the premiere of Van der Aa’s 'Sunken Garden', with principal roles in Glass' 'Akhnaten' (2016) 'Jakob Lenz' (2012) and the world premiere of Joanna Lee’s 'The Way Back Home', directed by Katie Mitchell at The Young Vic in December 2014. Other opera roles performed include Clorinda 'Cenerentola' and Gretel 'Hansel & Gretel' for HighTime Opera in 2015 and 2016, Ortlinde 'Die Walküre' and Wellgunde 'Das Rheingold/Götterdämmerung' for Fulham Opera, Zerlina 'Don Giovanni', Tina 'Flight', and Eurydice 'Orfeo ed Eurydice', as well as a concert performance of Zdenka in Strauss' 'Arabella' for Fulham Opera in 2016. Alexa’s concert work with The Auricle Ensemble has seen her tour Scotland with contemporary chamber works such as Schoenberg’s seminal work 'Pierrot Lunaire' and Maxwell Davies’ 'Miss Donnithorne’s Maggot', as well as programmes of diverse Cabaret songs, Mahler works, and a performance of Polly Peachum in Weill’s 'The Threepenny Opera'. Her soprano/clarinet/piano chamber trio Tenacious T’Weed also perform throughout Scotland. Alexa was soloist for the first live performance of the Philip Glass/Ravi Shankar album 'Passages' at the 2017 BBC Proms at the Royal Albert Hall, London. She also recently created the role of Dawn in Nico Muhly's new opera 'Marnie', at ENO in November 2017. alexamason.com 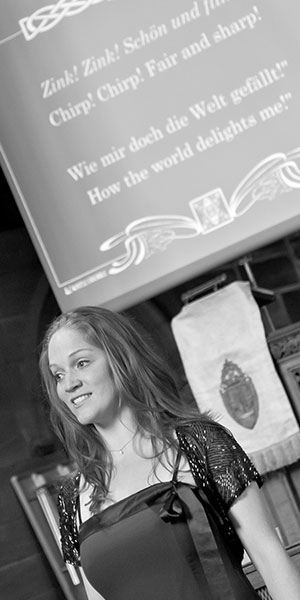 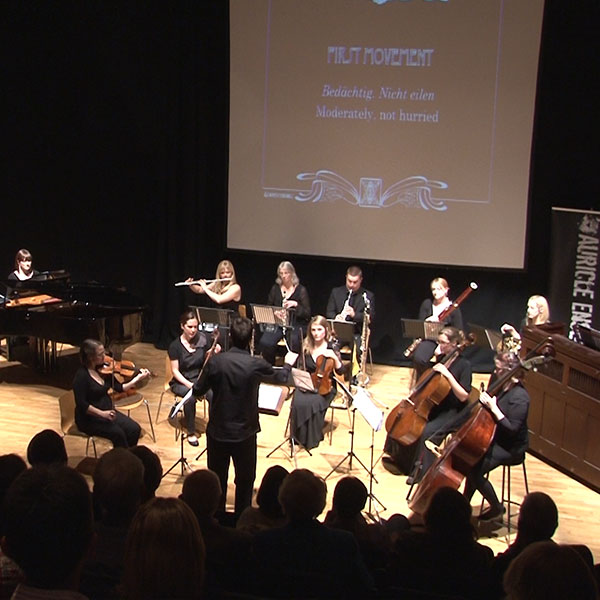 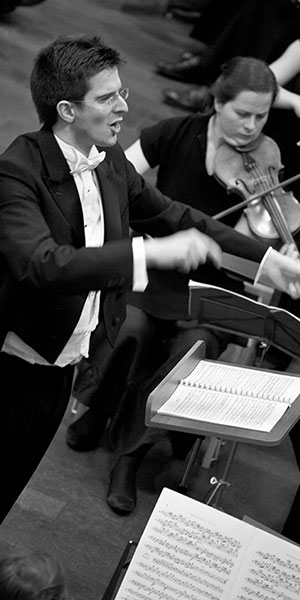 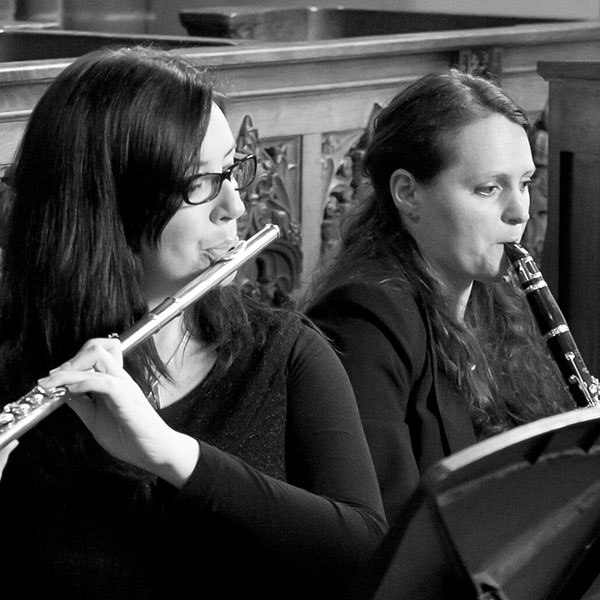